The world’s fastest network could carry all internet traffic on a single fiber. 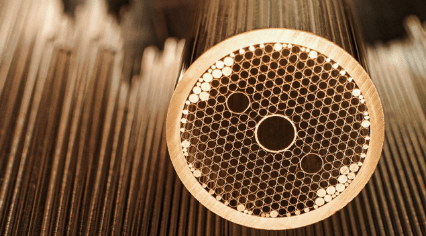 A joint group of researchers from the United States and the Netherlands have smashed the world speed record for a fiber network, pushing 255 terabits per second down a single strand of glass fiber.

This is equivalent to around 32 terabytes per second — enough to transfer a 1GB movie in 31.25 microseconds (0.03 milliseconds), or alternatively, the entire contents of your 1TB hard drive in about 31 milliseconds.

To put 255Tbps into perspective, the fastest single-fiber links in commercial operation top out at 100Gbps, or 2,550 times slower. 255Tbps is mindbogglingly quick; it’s greater, by far, than the total capacity of every cable — hundreds of glass fibers — currently spanning the Atlantic Ocean. In fact, 255 terabits per second are similar to — or maybe even more than — the total sum of all traffic flowing across the internet at peak time.
How did researchers at Eindhoven University of Technology and the University of Central Florida do it? Multi-core fiber! Today, the entire internet backbone consists of single-mode glass and plastic fiber. These fibers can only carry one mode of light — which means they can only carry the light from a single laser (it’s a bit more complex than that). You can still use wavelength division multiplexing (WDM) to push insane amounts of data down a single fiber (a few terabits), but we will eventually run up against the laws of physics.

Multi-mode fiber will likely replace the internet’s current single-mode backbone, but considering such an upgrade would need millions of miles of new multi-core cabling, and lots of new routing hardware to handle the multi-mode connections, we’re talking very long-term here. Still, with internet traffic continuing to grow at an alarming rate it’s nice to know that we now have the necessary technology to make sure that we don’t run out of bandwidth any time soon.